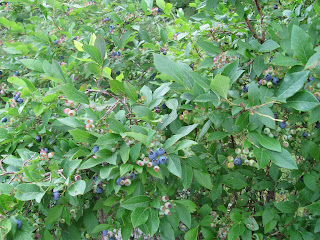 In my opinion, one of the most sublime events of summer is picking blueberries— especially those at the summits of a few of the White Mountains of New Hampshire which I grudgingly climbed as a young girl. After an arduous climb on Mount Chocorua, my favorite, my fellow campers and I would be treated to small, warmed-by-the-sun, sweet blueberries from low-lying bushes. I still remember our shrieks of joy when we discovered that the summit held a wealth of these bushes, which we ransacked like starving bears while looking out on incredibly gorgeous vistas, before finally collapsing for our naps. That was in the days before sunscreen, before trash on the mountains, before pesticides took over both the flavor and the condition of grocery store blueberries.

I am delighted to say that Anne Kiely captures this romantic appeal in her appreciation of blueberry picking at her beloved summer/fall residence on Cranberry Pond in Grafton, NY.  Anne Kiely is a retired elementary school teacher who has spent every summer at Cranberry Pond first as a child and later as an adult. This experience has profoundly shaped both her life and her family’s life.

We look forward to showcasing Anne Kiely today and tomorrow, with her memoirs of Cranberry Pond.

Stepping out the door at my home at Cranberry Pond I walk only a few steps and I am ready to begin my blueberry harvest. My can hangs from a strap around my neck, ready to hold the small round tasty fruit. This is an organic harvest; it has always been an organic harvest, long before I even knew what that meant.  These berries are grown solely by Mother Nature, not a cultivated crop.

Hopefully I won’t harvest stems, twigs, leaves or stink bugs, especially the stink bugs. Ugh, they smell rotten but they taste even worse. I don’t think they are poisonous, but from the few times I have inadvertently plopped them in my mouth I spit them out so fast that they didn’t have time to cause any harm except for their awful taste.

Sometimes the harvest gets detoured and instead of plopping the berries in my can, I plop them in my mouth; big mistake because now not many will find their way to the can- nope!  In my mouth they go.

Usually I pick alone. Almost no one in my family likes this activity. It is too tedious for them. For me it is a calm, restful time, a time for reflection and thinking, recollections.
It wasn’t always this solitary activity. When I was a child, picking was a family affair. My mother picked fast, including stems, twigs and leaves along with the coveted crop. My brother harvested directly to his mouth. When my brother and I would go picking together, just the two of us, I would bring home a pailful of berries. He would bring home a bellyful. My father would pull down the branches and hold them steady for me to pick. Sometimes my husband will do that for me, too, but he doesn’t do it the right way and quickly he loses interest and leaves.

Back then we all carried our burden of containers strapped to our belts at our waist. My parents fastened ten quart galvanized pails to their belts; mine was a more modest size.
Picking was good and we filled all our containers in an hour or so. Later I changed to cans on a heavy cord around my neck. I favored the metal coffee cans with plastic lids. They were snapped on the bottom of the can until it was filled and then put on the top to prevent spills.  I recalled my mother’s admonishment to be careful with full containers—
“Watch out, you don’t want to pick them twice—once off the bush, once off the ground.”

The blueberry harvest season is between mid July and late August.  Late in the season the berries are seedier and the birds compete with me picking early in the morning while I still sleep. I pick if it is raining or if it is warm, but chilly weather and buggy times deter me. There is always tomorrow.

I used to be able to tolerate a large coffee can hanging from my neck. Filled, it weighed about three pounds. Now that is too heavy and today I opt for the one pound size.
When the picking is good I can fill a can in about twenty minutes. In less than an hour I pick enough for two pies or several batches of blueberry muffins or lots of pancakes or toppings on a bowl of cereal or just a bowl of berries. There are hundreds of recipes in my collection.

There are more than thirty bushes in my front yard— the area between the front of the house and the pond. Each bush has its own distinctive taste and no two are alike. One prime bush teases with gorgeous blue-black berries hanging in grape like clusters devoid of flavor. They try to seduce me into picking them which I vehemently try to resist. Mostly I succeed. What’s the point of putting that effort into a flavorless crop when so much of the sweet-tart crop is available?

I think I will cut this temptation down, but it is hard to find the resolve to do that.

Standing in front of the tallest bushes I struggle to pull down the branches to reach the most desirable berries at the top. I remember picking with my father— a special dance just between the two of us. Filling my can with blueberries fills me with warm memories of special times shared with Dad.

If you look in my can you will see hundreds of berries in the can around my neck, but what I really carry is a lifetime of picking memories.