THE WRITER'S LIFE, CELEBRATING THE COHOES FALLS with "Prayer to the Water at the Falls" by April A. Kennedy

April Kennedy, one of the members of the Cohoes Library Writing Workshop, introduces a poem about her love for the Cohoes Falls. She has been inspired by their never-ending beauty and majesty her entire life.

April is a 5th generation Cohoesier who is also the 1st Ward Councilmember on the Cohoes Common Council. Her story "Remembering Josepha" was aired on Northeast Public Radio this past Mother's Day. April is a voice artist and writer who loves to travel the world and paint with watercolors. She narrated "Over the Falls," a beautiful nine-minute video produced by the Friends of Cohoes Falls, available at the following link, www.friendsofcohoesfalls.org.


Prayer to the Water at the Falls

Where is your source, there appears to be no ending
Is it as moving as you are
I watch as you move onto your destiny
I wish to be like you


The Cohoes Falls is indeed one of the Iroquois most sacred sites, discovered by the indigenous Mohawk tribe. It is said that in the 13th or 14th century, The Great Peacemaker, Deganawida, saw a vision of the Iroquois confederacy there, with the tribes coming together in a powerful, peaceful alliance.

The site has a storied past, and in 1865 an inn called The Cataract House was built over a rocky declivity of 75 feet. The inn was later renovated into a 2-story mansion with verandas overlooking the falls.

Currently, Brookfield Renewable Power from Canada holds a 40-year operating license for the School Street hydropower plant granted by the Federal Energy Regulatory Commission. In 2011, Brookfield ceded part of their land holding at the Cohoes Falls to permit the Iroquois access to their sacred site for the first time in 300 years.

From the Iroquois Confederacy comes the naming of the falls from the following Indian legend, one of the Hiawatha tales, which was indeed corroborated by the Dutch explorer, Adriane Vander Donck, in his Description of New Netherlands, in 1655.  We excerpted this story from a slightly longer version on the City of Cohoes website, www.cohoes.com. Our featured painting is also from this website.

"Once long ago before the White Man came, the land of the trees and rivers was free. Life was good, the Great Spirit smiled, peace reigned in the Wilderness. The braves hunted, the squaws labored, as was the way.

Once a young maiden, the beautiful daughter of a chief and the pride of the tribe, was working at the river's bank. She tired in the heat of the day and sought the shade of one bark riding at the water's edge. She sat, and quickly fell into a deep sleep from which no motion of the craft would wake her.

The canoe slipped from its mooring, was caught quickly by the river's swift current, and glided silently toward the white water at the brink of the Falls. The rapids and the tumbling water's roar woke the slumbering maiden. She screamed to no advantage, attempted unsuccessfully to right the bark's course and finally resigned herself to her fate, death at the Fall's edge. The mists covered her, the Falls claimed her, and no remains were ever found.

The Tribe mourned its loss and all marked this place, for a princess...daughter of a warrior, died there. All called the place Coho, the place of the Falling Canoe." 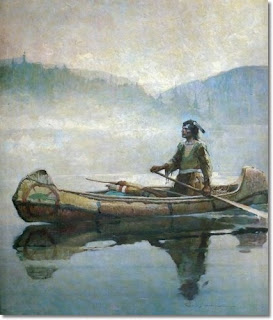