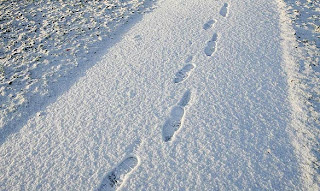 We now introduce Daniel T. Weaver, owner of The Book Hound, www.thebookhound.net, an antiquarian and used bookstore on Main Street in Amsterdam, NY. This store specializes in books on religion, New York State history, non-fiction and children’s books and also hosts a Friday evening (5:00-9:00 p.m.) open writing workshop when the store transforms into Café Edie. Weaver has had poems, articles and essays published in many periodicals. He is a regular contributor to the Sunday Gazette in Schenectady, NY.

This essay was previously published in the debut issue of Upstream, A Mohawk Valley Journal and is reprinted here with the permission of the author. We love the way in which this writer expresses compassionate, moral ideas in a lyrical way.

It was the first snowfall of this winter, and my wife and daughter and I were walking to the car.

"Step in the footprints daddy made earlier so you don't get snow in your shoes," my wife said.

As I watched my daughter, in the twilight of her teen years, stretching her thin legs beyond their normal stride to walk in my footsteps, I felt the hammer under my third rib strike hotter and harder than usual. And I knew that whatever happens in life, I have to do the right thing--sometimes the hard thing--because eventually the sun will come out, and my footsteps will be lost to her forever.

And then a few days later, I was in our computer room and I saw a beautifully bound book with a sewn in bookmark on the cot. I picked it up to see what it was, opened it and found words in my daughter's handwriting which said I was the person she most respected in the world. I slammed the book shut, feeling bad that I had invaded someone's privacy but feeling good about what I had read.

And it happened again on Christmas Day. My wife gave me a letter, instead of a card, because she couldn't find a card that said what she wanted to say. And the letter said in part, "You are the yardstick I would like our children to measure what a man is by."

Who could ask for a nicer Christmas present than that?

The truth is that all three events were precious gifts to a fifty-three year old man. Middle age can be a scary time for both men and women. Nothing is what it used to be. In a single night, the temperature can drop and black ice glaze your dreams. Already your body and brain are beginning to fail you in subtle ways. Your children are leaving home. You become restless with your job or get laid off and no one wants to hire you. And if you have a job, you worry about how you will make it when you retire. Worst of all, many of the self doubts of adolescence erupt again like a bad case of acne.

Then a stranger enters your life and you look into her eyes and see the stark beauty of swamps and marshlands, the owl meditating in a dead tamarack, the water below unmoving, silent, seemingly empty of life to the careless passerby, but brimming to the more observant.

Maybe you’ve been married for twenty-five or thirty years. For all those long years you never climbed over fences or rock walls to trespass on your neighbor’s pastures or even neighed at your neighbor's wife. Sure, when you were younger, you often looked at the bodies of other women and felt strong longings. But they were no more than the springtime longings of a stallion--blind reflexes--the doctor hitting just below the kneecap with a rubber mallet and the leg springing forward with no will of its own.

So why not wade into the deep waters? Everyone else seems to be doing it. A governor from another state runs off to Argentina, not telling anyone where he is going, and makes an ass of himself. Your own governor and former governor have both turned the television set into a confessional booth.

But you know that kind of thing is not for you. You can’t slink around behind your spouse’s back, no longer able to look into her eyes. No sordid visit to a motel for you, followed by rumpled sheets in the morning and the weary feeling that what you got was not really what you were looking for.

So you pull back from the edge of those deep waters--thankful however for those sweet words that removed some of your self doubts--but knowing also that many men and women have drowned themselves in similar waters.

And you realize that what you first saw when you looked into the depths of those eyes--what you thought you fell in love with--was not someone else, but your own image reflected in them. And you realize also that you haven’t lost anything by not diving in. True love is still there, in that pure mountain stream that you drank from and swam in for decades, and that knocked you off your feet the first time you waded into it so many, many years ago.