THE WRITER'S LIFE, CAT FISHING IN SCHENECTADY, (with apologies to Richard Brautigan) by John Angilletta


We extend many thanks to John Angilletta who furnished this heart-warming memoir just in time for Christmas. John lives in Scotia and served as editor and chief writer for both the CSEA Local 690 newspaper and CSEA Region 4 newspaper, The Communicator.


Those of us who love our cats and dogs will find a comrade in John who is often able to transform his love of people, animals, music and the outdoors into passionate memory stories. Happy holidays to all, hug the creatures tight, and dream of fishing season. 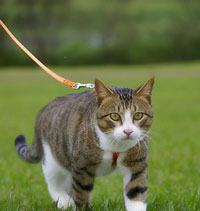 When I graduated from college in 1972, my future wife gave me a graduation gift of a small tiger cat that I named Ranger. Ranger became my constant companion and went everywhere with me. He was the smartest cat that I have ever owned but also loved a good fight and had a very impressive record of battles. As far as I know, he lost only twice, once to a raccoon and the other to a possum.
Ranger moved to Syracuse with me after graduation and finally in 1974 we moved to Schenectady after my fiancé landed a job with the phone company. I also was able to find work here and we rented a nice studio apartment in the Stockade area of Schenectady two doors up from the Van Dyke Restaurant.
Since there were more than a few nasty-looking stray animals around the apartment, I was reluctant to let Ranger roam free as I had at school and in Syracuse since I knew that he couldn’t turn away from his natural urge to fight.  He had a tough time adjusting to the life of an indoor cat, and I began to take him out for short walks around the neighborhood on a leash which he thoroughly detested.
We finally came to a compromise when I started tying a fishing line on his collar and allowing him to walk around by himself for awhile. If I felt that he was too far away, I would simply reel him in. He seemed to enjoy the freedom and I was pleased with my ingenuity.
One beautiful summer evening I was sitting on the front steps of the apartment building with my fishing pole in hand and Ranger happily wandering up and down Union St.  My wife Debi was working a late shift and I heard the phone ring inside. I set the pole down and went inside to answer the call. The call happened to be from my friend Pete who was in the Army, stationed in Hawaii.  Since we hadn’t spoken in quite awhile and with Pete getting free long distance from the military, the conversation lasted for nearly an hour.
After hanging up the phone, I put an album on the stereo and waited for Deb to get home so I could tell her about the call from Pete.  After a few moments I sensed that something was missing inside the apartment and then remembered that I had left Ranger outside on the fishing line!
Rushing outside I was relieved to see the fishing pole where I had left it on the front steps. My relief was short lived, however, when I saw that all of the line was off the spool. This began a very unscheduled tour of the Stockade.
As I began reeling in the line, I was taken down a narrow alley on the side of the apartment. Next I had to climb over a backyard fence and then through some of my neighbors’ back yards. All of this had to be done very carefully and slowly so as not to snap the fishing line which hopefully still connected me to my beloved cat.
After the tour of the neighbors’ yards, the line led me up a driveway and back to Union St. where I was led around a large maple tree twice and then back toward my apartment.  By this time I had also attracted a group of my neighbors who were following me and laughing hysterically at the “crazy guy with the cat on his fishing pole.”
As the line once again led me past the front of the apartment, it now took me down an alley on the other side of the apartment and began to tighten. I knew that my “cat fish” couldn’t be far away now. As the line went around the back of the Van Dyke restaurant, I was finally reunited with Ranger as he sat happily finishing a plate of leftovers given to him from two cat-loving cooks from the Van Dyke who had been wondering about the visitor with the fishing line attached to his collar.
After thanking the two laughing cooks, I gathered a purring Ranger in my arms and headed home with my fishing gear to a smattering of applause from my neighbors who had tagged along to see how my fishing trip concluded. 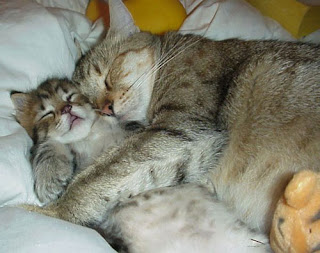 Needless to say, this was Ranger’s last trip out on the fishing line; however, I did bring him to the kitchen door of the Van Dyke about once a week to get a free meal from his new “private” chefs. Ranger lived to be 20 years old and had so many adventures that I would love to write a book about him someday. I will always remember, though, the night of cat fishing in Schenectady.