THE WRITER'S LIFE, COMMEMORATING THE EARTHQUAKE IN HAITI, JANUARY, 2010 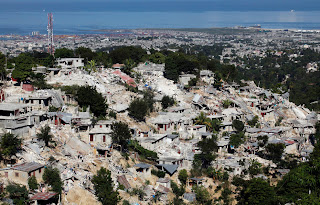 Today, January 12, 2013, is the tragic anniversary of the massive earthquake that struck the nation of Haiti three years ago, causing catastrophic damage to the capital city of Port-au-Prince and surrounding areas. The devastating event severely harmed the poorest country in the Western Hemisphere, resulting in the loss of over 300,000 lives and the descent of 1.5 million people into homelessness .

What is less known, however, is that a cholera epidemic, blamed on international U.N. troops participating in the recovery effort, killed almost 8,000 people, making more than half a million sick. Today, in spite of pledges of billions of dollars in international aid, rebuilding has barely begun, and nearly 400,000 people are still living in crowded camps. Our friend, Susie Zeiger, documents these conditions and their tragic results in her poetry and prose.

Susie is a teacher and writer living in New York City and Western Massachusetts. For over thirty years, she taught in the New York public schools and now teaches at the American International College in Springfield, Massachusetts. She has studied Haitian Creole for decades and makes frequent trips to Haiti as an interpreter for various humanitarian and medical groups.

We present one poem and one personal essay by Susie Zeiger, whose graphic stories bring readers directly into the tragic experience of girls and women in the camps.

The girl is too old for her age.
She is awake before the rooster crows
and asleep when the moon is too high in the night sky.
She is too sad and too obedient.
She scrubs pots with sand when she should be listening to the droning of a teacher’s voice, sitting straight on a hard wooden bench on the girl’s side of the dark, airless, cinderblock classroom.
She works on Saturdays when she should be walking to the market with a mother she will never remember.
She works on Sundays when she should be praying with her parents and brothers and sisters in the small village church where her mother used to take her, still a very young child, to pray for rain when there was none.
She sleeps on the floor in the kitchen of the stranger’s house, too tired to miss the family she left behind in the countryside.
She is in the capital city where it is too hot, where no breeze blows through the kitchen, where she spends too many hours or at the steamy, crowded market she must go to daily with the tall silent girl to buy food she must help to prepare, but almost never eat.
She is given the leftovers, what remains after the dog has been fed.
She may be twelve she thinks, but looks older.
She can’t remember when or where she was born and can’t ask her mother whom she hasn’t seen in so many years she has lost count.
She is in the capital city now.  Her mother in her village, a day’s bus ride away.
She is beaten at the whim of the head of the house when the food is not ready on time.
She cannot read the clock in the kitchen where she spends too many hours.
She is beaten, often for no reason she can comprehend.
She is Haiti’s best kept secret.
She is a restavek, a child slave.

Christophine is a lovely seventeen year old Haitian girl with the sweetest of smiles.  She has a twin sister who doesn’t “pale bien,” speak correctly, according to their mother.  She also has an older brother in his early 20’s.  I don’t think their father is present.
When the earthquake of January 12th, 2010 occurred, Christophine’s family, along with over a million others, lost their home and were forced to live in a tent camp which held hundreds of internally displaced people from communities throughout Port-au-Prince.  A good number of these Haitian tents are mere lean-tos fashioned with either bed sheets or tarps and may wash away when rain falls or tropical storms strike.  In the afternoons you won’t find most camp residents in their tents since they trap the heat.  I’ve been told that these tents can get as hot as 110 degrees during the hottest periods of the year.
The sanitary conditions are beyond dreadful as well.  Before OXFAM and other NGOs pulled out of Haiti there were free porto potties.  Now the hapless half million or more remaining in the camps must often pay when they need to relieve themselves.  When the NGOs originally placed these toilets in the camps they were put on the periphery of the unlit camps.  If water is available, there is no privacy when camp residents need to bathe.
Children are often left alone in their tents when their mothers must leave to try to sell their goods in the market or to get food.  There are few schools in the camps as well, so children must fend for themselves.  Since whole communities were destroyed in the earthquake, camp residents can’t depend upon the kindness or help of their former neighbors who may be living at a camp far away.  The fabric of community life was in large measure destroyed when the earth opened twenty-one months ago.  While there are camps in which the residents were able to create infrastructure and organization, there are too many which are completely lawless.
One late afternoon Christophine’s mother had to leave her daughter alone in their tent.  Two zenglendo (criminals) cut through the family’s tent with a knife, blindfolded, then kidnapped the young girl at knifepoint and drove her to an undisclosed location where they cut off her clothes and raped her for two days straight.
About a year ago the girl’s mother was able to get a modicum of justice for Christophine.  One of the perpetrators was jailed and remains there to this day.  However, since then the rapist’s family has threatened the mother and daughter with death.  Their family is forced to sleep in a different location every few days.  Fortunately they are supported and protected by a group of fanm vayan (courageous women) from a women’s organization whose members themselves were victims of rape after the first coup d’etat against Aristide in 1991, during the ensuing four years of military violence, as well as during the second coup against Aristide in 2004.
When I signed up to be a participant in The SOAW (School of the Americas Watch) delegation to Haiti I did not volunteer to interpret for the group for two main reasons.  While I’m a competent interpreter for medical and education translations, I’m not a good enough interpreter when it comes to the political and economic domain.  Secondly, when I translate and have to deal with sensitive material I tend to space out when someone speaks for long spells.
Suffice it to say that since we had a very poor interpreter on our first day who was let go that very same day, I volunteered to translate the following day when Christophine’s mother told her daughter’s story.  We were at the Bureau des Avocats Internationales, the headquarters of a group of   dedicated, overworked lawyers.  Before the mother spoke I had no idea what my pinch-hitting task would entail.  As she recounted Christophine’s ordeal I recall shaking and biting my lower lip while I watched tears well up in the eyes of many of my fellow delegation members.
There was perhaps a nano second when I felt that I had to stop, but I willed myself to continue.  A force stronger than myself overtook me and continued to flow through me.  When Chrisophine’s mother pulled out her daughter’s cut up dress and underpants and burst into tears while becoming more and more agitated, I kept up the translation.
Afterwards I took both mother and daughter in my arms and embraced them, or perhaps they embraced me.  I don’t recall.  I told them how terribly sorry I was to learn of Christophine’s unimaginable ordeal.  And minutes later, tears flowing from my eyes and the mother’s, we held hands and stared into each other’s eyes, the unspoken understanding that a mother must protect her child no matter what, and would rather die than have her child experience what this mother’s daughter experienced.